The Valkyrie is the ultimate culmination of Aston Martin pedigree and Red Bull Racing Formula One Team technology. The more than extreme Valkyrie will hit the roads and circuits soon. A car like this is very suitable for various livery designs and special editions. This livery project is my personal hommage to Aston Martin's racing heritage and important place in automotive history, and a celebration of their 2018 105th year anniversary. I selected some of their most iconic models and created heritage and celebration liveries accompanied with a brief historical context, starting with their latest WEC successes and chronologically going back in time all the way to the very first ever built Aston Martin.
Note: This is a personal and non-commercial project. All Valkyrie and Aston Martin images and logo's used in this art project are protected by copyright and property of Aston Martin. As are all other brand logo's from the Valkyrie's construction partners.

AMR PRO LIVERY DESIGN
There will be a track version, but there is no speculation about the track-only version of the car yet, other than that there will be 25 track versions available, and that the Valkyrie track car, like the road car, is capable of producing 1,814 kg (4,000 lb) of downforce without the use of a rear wing. Aston Martin and Red Bull have collaborated with several manufacturers for the Valkyrie's construction: Cosworth (engine), Ricardo (transmission), Rimax Automobili (hybrid battery system), Multimatic (carbon fibre MonoCell), Bosch (ECU, traction control, ESP), Alcon and Surface Transforms (brakes and callipers), Wipac (front and rear lights), and Michelin (tyres). (source: wikipedia) All these construction partners have been addressed in my livery concept below.

RED BULL RACING FORMULA ONE TEAM - SPECIAL EDITIONS
The Valkyrie has been developed by Aston Martin and Red Bull Racing Formula One Team. Furthermore, in 2018 Aston Martin will be title sponsor of the Red Bull F1 team. To celebrate this fruitful collaboration, based on the 2017 RB13 and 2018 'AMRB14', I played around with the current Red Bull livery theme while using Max Verstappen's race number 33. 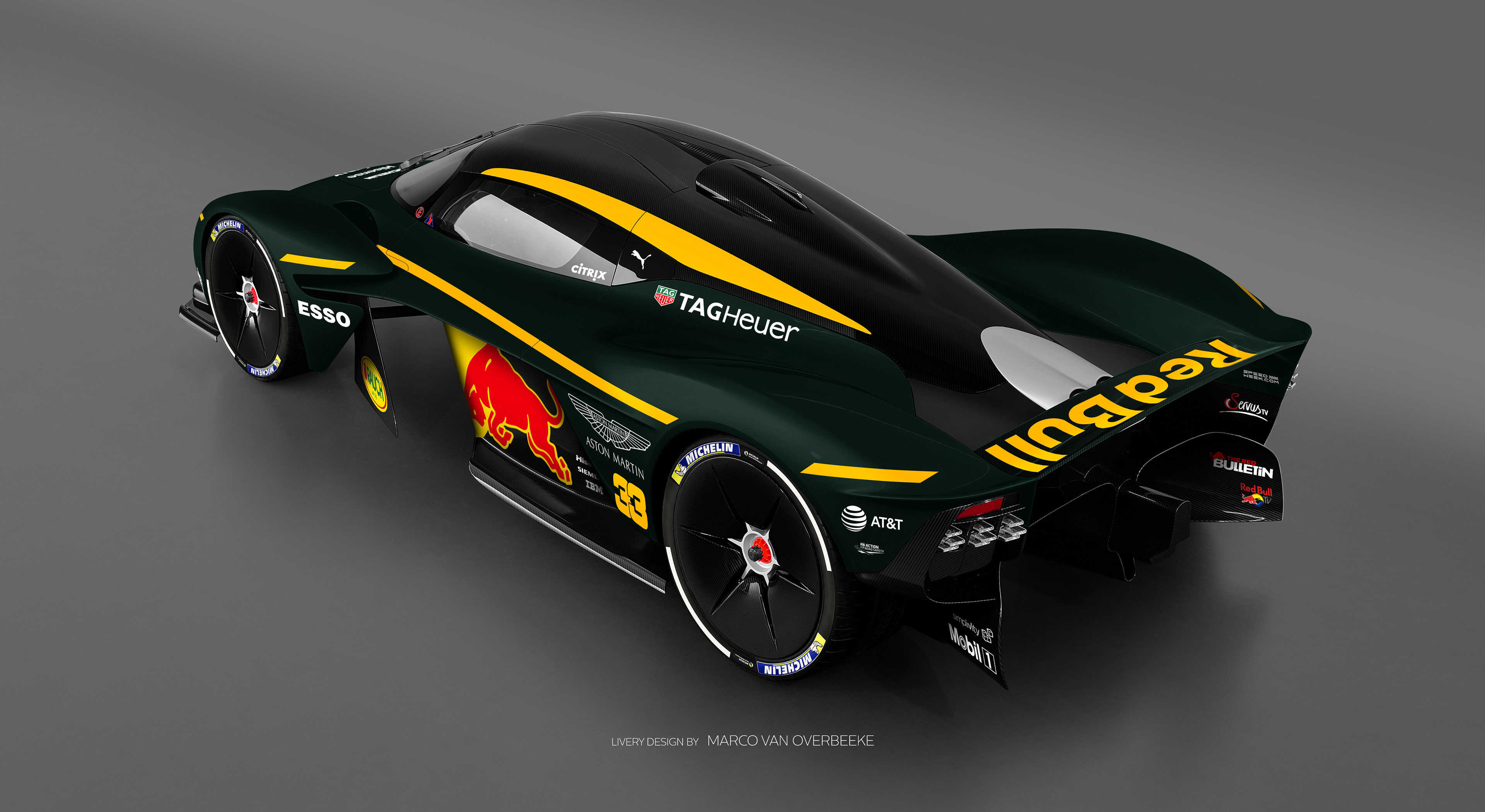 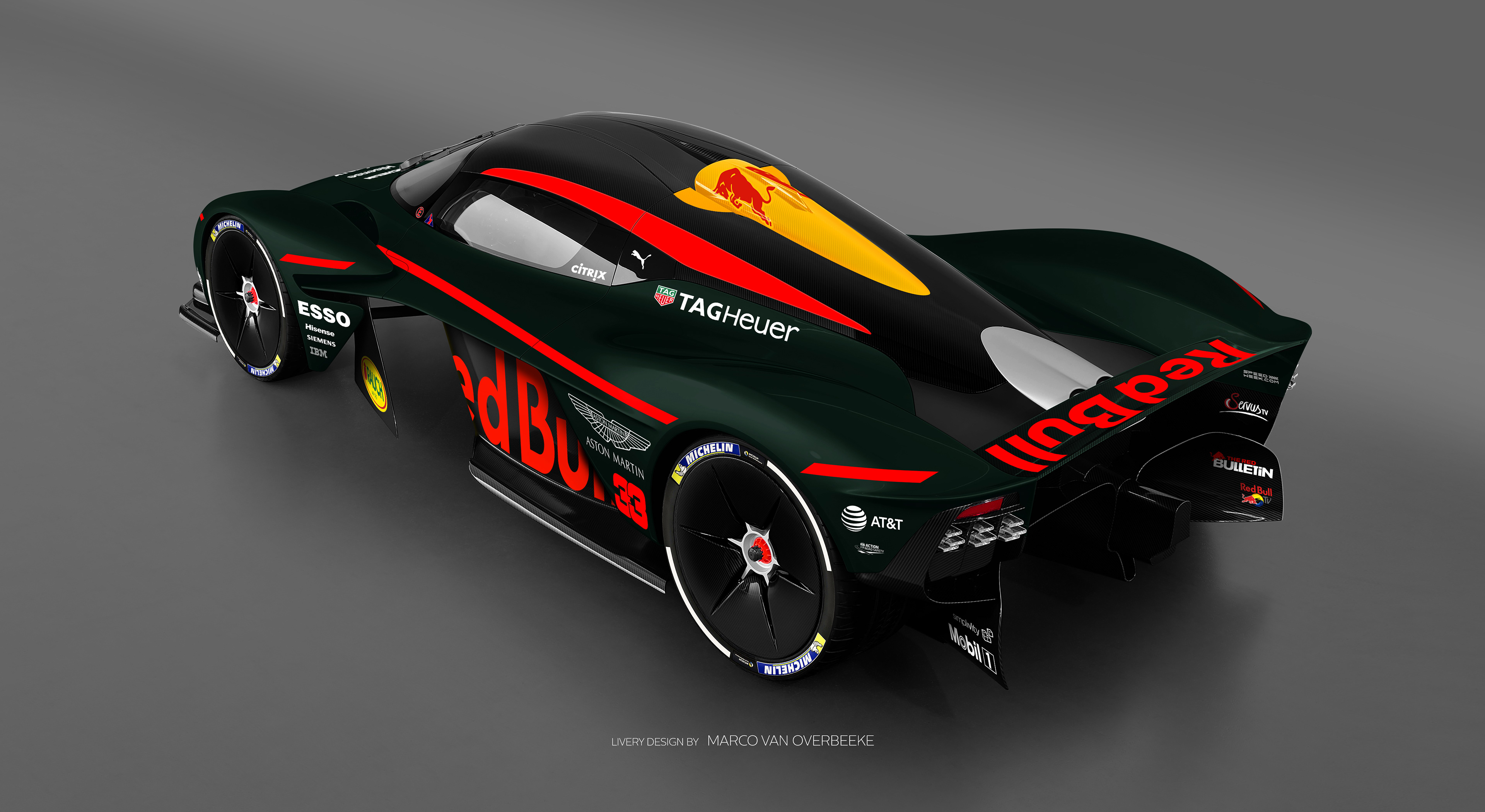 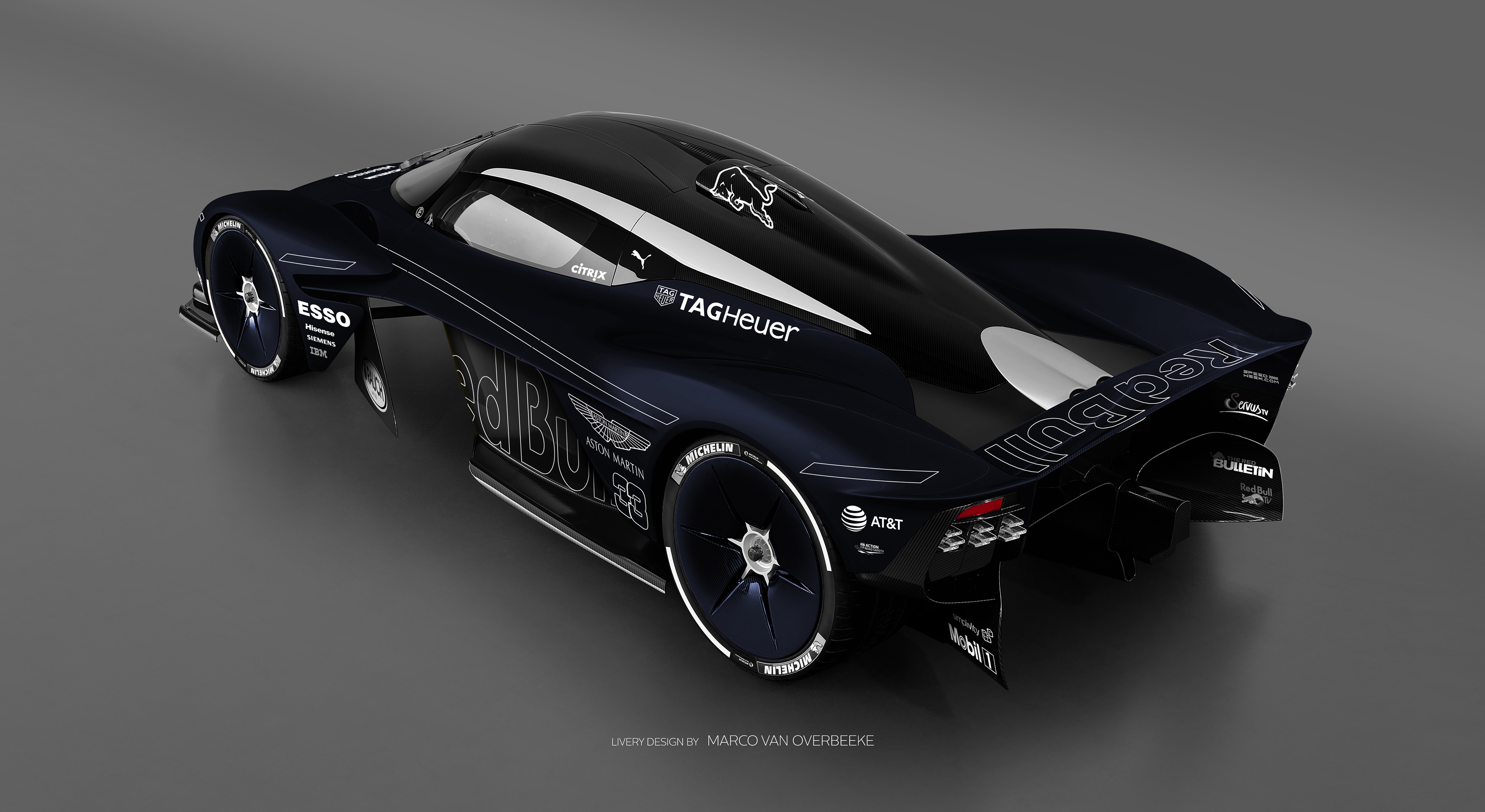 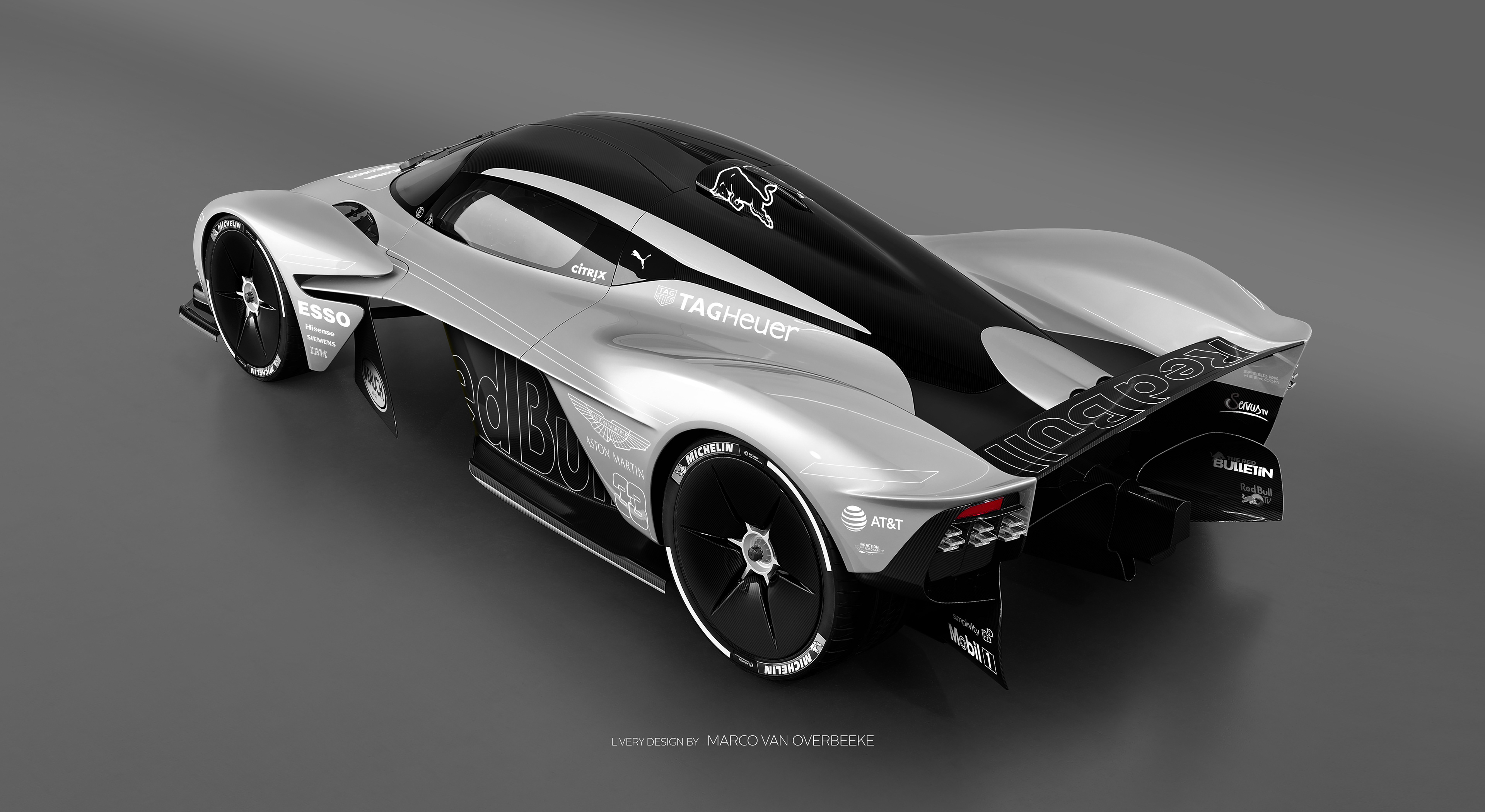 ASTON MARTIN RACING & WEC VICTORIES
Aston Martin has been very successful in the Le Mans Series and FIA World Endurance Championship (WEC), in LMP1 as well as LMGTE classes. The liveries shown next are hommages to some of these iconic race cars. Both in 2007 and 2008 the DBR9 #009 was victorious at Le Mans. The DBR1-2 #007 won the 2009 Le Mans Series overall. The Vantage GT8 #95 clinched the 2016 LMGTE Championship and in 2017 the Vantage GT8 #97 won the 24H Le Mans spectacularly by overtaking the leading Corvette in the final lap. 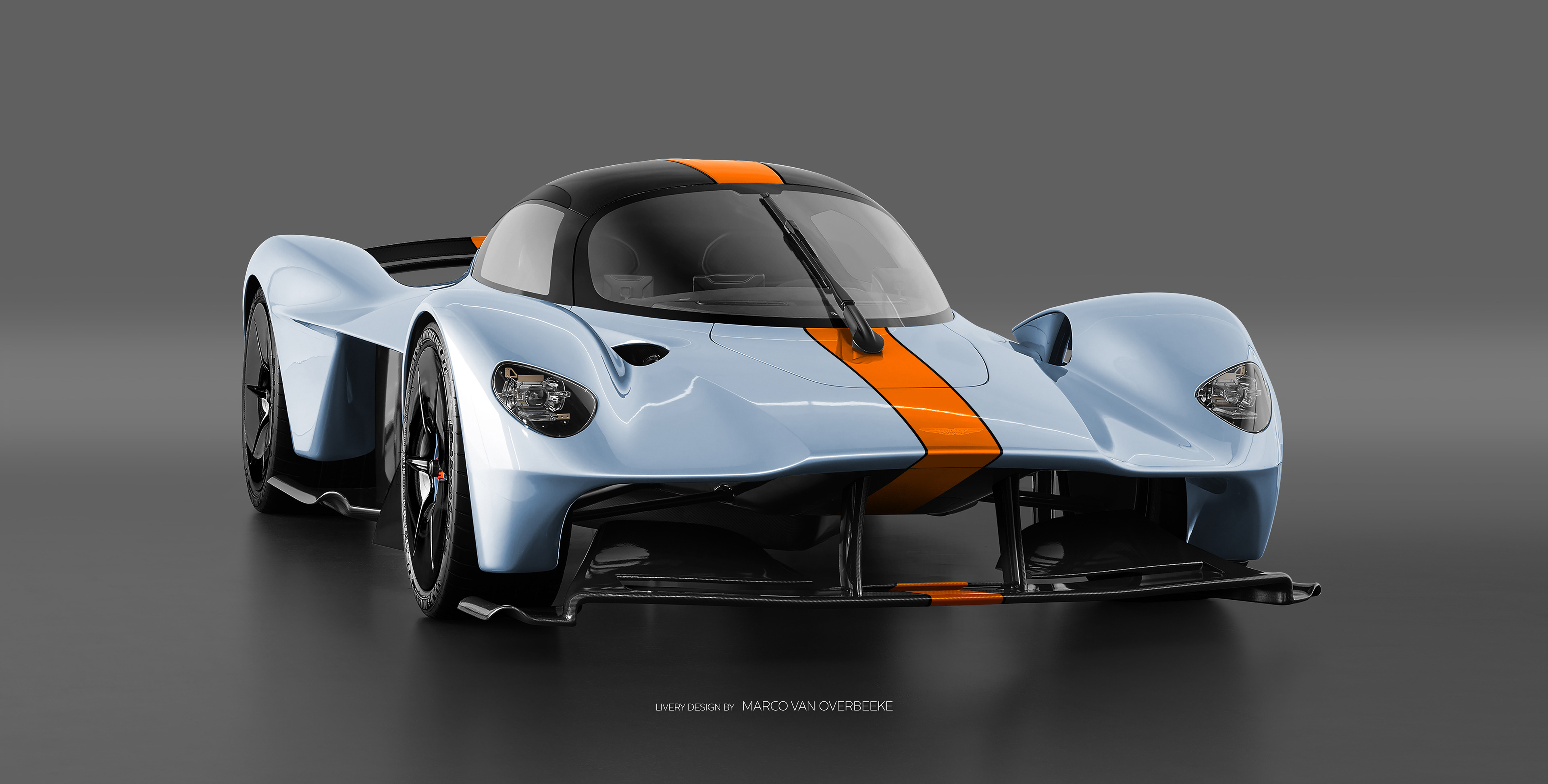 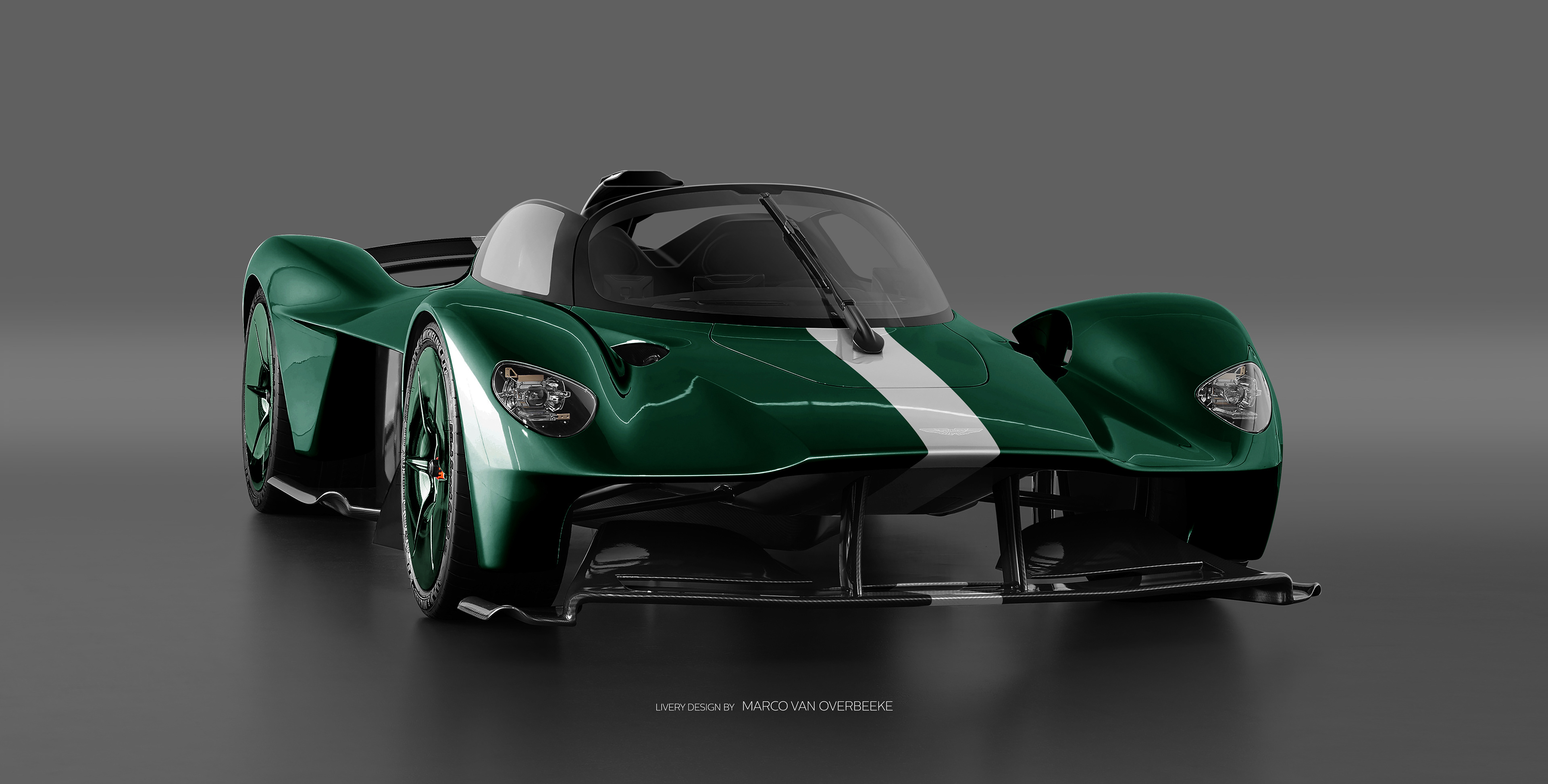 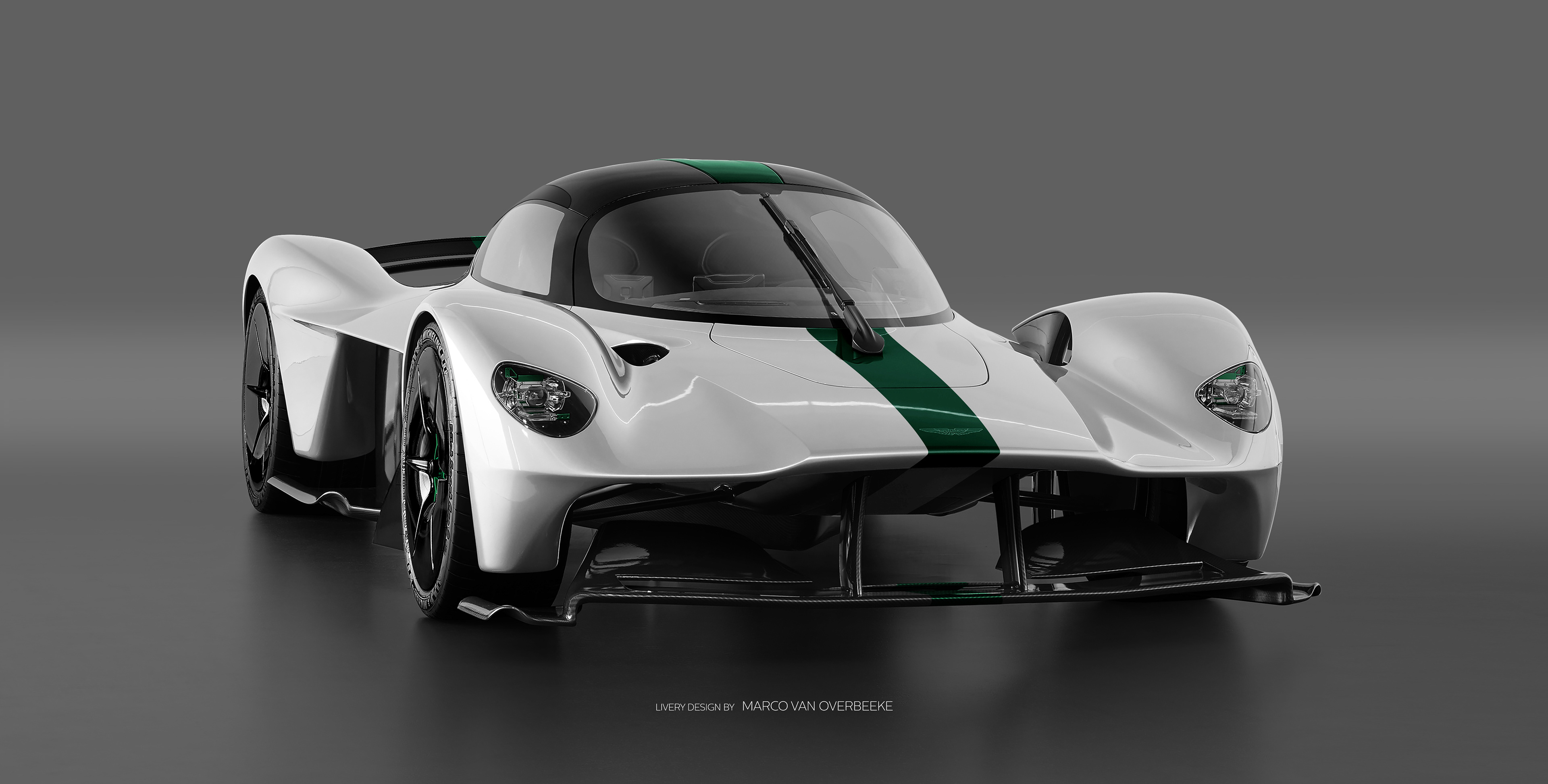 ANNIVERSARY EDITIONS
The following livery designs are celebrations with 1) the 105th year anniversary of the Aston Martin brand, incorporating the iconic Aston Martin logo's used since the beginning of the brand, and 2) the James Bond saga with 007's DB5 inspired special edition.

DBS V8 'MUNCHER'
In 1977 Robin Hamilton drove this highly modified DBS to the Le Mans finish line. Not the most victorious Aston Martin race car ever, but certainly an iconic vehicle that tells a story about persistence and pursuing the Le Mans dream.

TRIBUTES TO THE DB3S, DBR1 AND DP212/DP214/DP215
The following livery designs are tributes to the mid 20th century race successes by the various DB3S cars, the 1959 Le Mans winning DBR1 and the gorgeous DP cars.

(below) Incorporating the above DB3S/5-livery with the Valkyrie logo.

PRE-WAR HERITAGE EDITIONS
The following livery designs are tributes to Aston Martin's origins as a car builder, starting with the very first Aston Martin ever built, nicknamed the 'Coal Scuttle'. Followed by the A3 prototype (the oldest surviving Aston Martin), the famous 'Green Pea' and iconic 'Razor Blade' Side Valve cars, a British Racing Green Edition, and finally the illustruous Ulster.